The customer, who requested we not share their name, first approached Montalvo with the basic need of enhancing the capabilities of their machine so that they could increase productivity. After careful analysis Montalvo performed the installation of an X-3000 Advanced Tension Controller (now the X-3400HD), a V-510 Tension Brake, and replaced the customer’s dancer assembly with a series of T-Series (now ES Series) Load Cells. 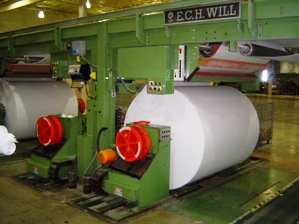 The results were immediate. Faster lines speeds combined with the ability for the customer to run larger rolls gave the customer never before seen

production levels. The larger braking system and advanced features of the tension controller allowed machine operators to handle e-stops by adding an additional spike of air pressure to the brakes to keep the web tight as the rolls came to a fast stop.

Due to the patented design of the V-Brake the customer was able to utilize its larger torque capacity without sacrificing speed because of the V-Brakes ability to dissipate more heat compared to other brakes.

President Ed Montalvo says, “This result was something we have had a lengthy period of time to document. After two and a half years in service, the customer had only changed brake pads twice. The customer has broken the record several times since the initial retrofit.”

The Montalvo Corporation specializes in the analyzing, upgrading and servicing of customer’s web tension control equipment. For over 65 years, Montalvo has manufactured, integrated and serviced a wide range of web control products and systems for the converting, paper, foil, nonwovens, and plastic film industries as well as packaging, medical and high-tech applications. Montalvo products include electronic tension control devices, load cells, indicators, brakes, clutches, and safety chucks. Montalvo manufactures in the United States, and sells worldwide.