Check out the data below to see what it means when we say we only manufacture load cells that are industry leaders in accuracy, sensitivity, and performance.

*Montalvo utilizes the same beam technology amongst its entire line of load cells. Although the following chart and graphs specifically label the ES Series of load cells, the information applies to the beams that are used in Montalvo’s other styles of load cells.

The following chart shows the results of our load cell sensitivity & resolution testing. It represents the ability of individual beams to reliably and repeatably detect and produce a signal for a change in load/tension. For example, testing has shown that our 3 lb beam can reliably and repeatedly detect and produce a signal of a 0.002 Pound/0.01 Newton change in load/tension. 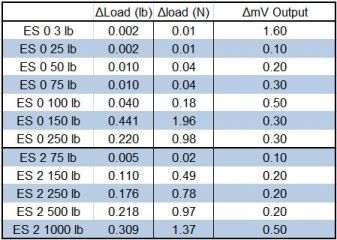 Load cells can be highly sensitive; but if they do not also feature high resolution then your application will never fully receive the sensitive signal. Montalvo ensures each of its load cells are leaders in both sensitivity and resolution.

Stay Up to Date On the Latest Product Releases and News